Water Pipe Noise When Water is not Running 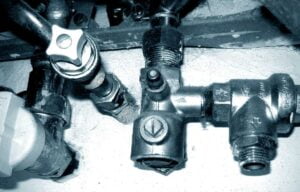 Your plumbing system is likely to experience plumbing problems sooner or later. There are some common plumbing issues all homeowners are likely to encounter in their homes, from leaking to blocked pipes. Now, what about the water pipes making noise with no running water?

Have you experienced such a problem with your plumbing system before? How did you handle it? Of course, many homeowners might be caught off guard with such problems. Let's look at the types, causes, signs, and what to do if you face this plumbing problem.

Water pipe noise when water is not running and it may symbolize an underlying problem in the water pipes which have otherwise gone unnoticed. Seek help from a professional plumbing service to fix any plumbing problem you might have.

Related article: pipes knocking when hot water is turned on

Types of Water Pipe Noises and What they Symbolise

Water hammering occurs when you close the valve immediately such that the water moving in the pipe is blocked from exiting. Due to the energy and momentum, a loud banging noise is produced when the sprinkler system is shut off.

Fix water hammer arrestors in your pipes to eliminate this problem. Hire a professional plumber to fix this.

Whistling sound can come from the pipes or the valves and faucets. The whistling sound in the taps may be caused by a loose brass fitting or a damaged washer. If this happens, turn the faucet off and replace the damaged part.

Whistling noises in the toilets may be produced and stops when the tank is filled. If your bathroom has such a problem, then your ballcock valve is damaged and should be replaced. However, if the toilet whistles non-stop, the problem is the vertical overflow tube. You can fix this by bending the float arm to help turn off the ballcock sooner.

The whistling sound can, however, come from everywhere in your plumbing piping system. This problem is caused by an ineffective pressure regulator or a damaged main supply valve. Seek help from a qualified technician if you experience this problem.

When using copper pipes that aren't adequately insulated, chances are you might hear squeaking or rubbing noise coming from the pipes. An explanation for this is probably the heating effect of hot water in the pipes. The heat causes the metal pipes to expand and rub against the structural component surrounding them. If you experience this problem with your copper pipes, lower the heater temperature to eliminate this issue.

Shaking water pipes is typical in pipes hanging freely. The slips may get loose, causing the plumbing pipes to start swaying.

When warm water passes through copper pipes, they expand. They later reduce in size when warm water stops moving. This change in size causes motion such that the pipes scratches against the house's studs or support brackets in the walls causing loud noises.

Shaking and rattling sounds will be evident on the walls. It's good to seek professional help if you discover this in your home.

A blockage in your water line may cause a gurgling sound to come from the pipe. This will be evident when you try to drain out excess water/waste. Debris build-up and materials drained through the pipes may cause the pipes to block. So you should be careful with what you allow to pass through your pipes.

Cleaning the duct is simple but if the debris build-up is extensive, call a skilled technician to remove it.

Thermal expansion in the pipes may produce a dripping or ticking noise when water is not running. If you experience this problem, you can reset your air chambers to eliminate the noise. If you try this and fail, you should fill the bathroom sink with hot water and flush the toilet, after which you drain the hot water from the sink. You should hire a plumber to help you eliminate the noise if you try this method and fail.

Water pumped from the source has a lot of pressure. When the pipes are loosely attached to the frames, the high water pressure will cause the pipes to vibrate or bang up against these frames producing noise.

You should address this problem because the pipes can develop leaks as they bang against the frames.

Washers commonly used are made of rubber or fiber. They are used to seal against leaks. However, the washers can get damaged, causing water to escape through the leaks. A squealing or whistling sound accompanies the escaping water.

To eliminate this sound, shut off the valve and check the hose to inspect the washer. Replace the washer if it's damaged.

If the problem is not with the washer, then your faucet/tap is faulty. Shut off the main valve, then replace the faulty faucet/tap.

The mains water valve regulates the distribution of water to the whole plumbing system in the home. When this shut-off valve gets damaged, there will be pipe noises all around the house. A faulty pressure regulator has the same effect.

A damaged ballcock can cause a gurgling sound in your toilet when you pull the lever and flush. When you hear a banging or rattling noise after flushing the bathroom, then your ballcock assembly is damaged. A faulty ballcock should either be repaired or replaced.

Sludge Build Up and Blockages in the Pipe

Debris collecting when the pipe components start wearing and tearing will start running along the pipes producing a rattling noise. The central heating systems build up sludge which, with time, circulates the pipeline creating the same effect.

Don't attempt to fix the water heater by yourself; get help from an experienced plumber who will carry out a power flush.

When the water running through the pipes do so at a higher speed than the recommended level, the pipes' noise will come out from the pipes when the faucet is closed. Get a threaded pressure gauge and fix it to the sink faucet.

When aerators in the piping system wear out, water flow is altered to cause a whistling or squeaking noise is produced. A squealing noise coming from a single tap indicates a blockage in the filter screen or aerator screen inside the tap.

Squeaky noises in concealed pipes are challenging to eliminate. Copper pipes that are poorly insulated result in bulge growth if the water supplies hot water. The pipes expand, banging against the wall to produce a squeaky noise that comes from the wall.

Are Noisy Water Pipes An Emergency?

Vibrating pipes that bang against the wall may leak water to the wall structure. The leaking water may undergo condensation, forming mold growth on the wall surface. Apart from the molds causing structural problems to the wall, they also pose a health threat to the home inhabitants and are expensive to control.

Water hammers, on the other hand, damage the seals or washers of the pipes. Other items that might be damaged are the meters and gauges, which are all expensive to replace.

How to Eliminate Noises in Water Pipes

If noises are coming out of your pipes when water is not running, try using this guide to help eliminate the noise.

Depending on the noise source and the prevalence of damage, this guide may work or fail to eliminate noise in the noisy pipes. If it fails, call a professional plumber to get help.

Several factors cause water pipe noises when water is not running. These noises indicate that something is damaged in your plumbing system. When left unaddressed for a more extended period, more significant damage can occur to your piping system or the wall structure. You're therefore advised to fix the problem as soon as you learn of these noises.

Call a Plumb Guardian for all your kitchen and bath plumbing services.

Stay up to date

We use cookies on our website to give you the most relevant experience by remembering your preferences and repeat visits. By clicking “Accept All”, you consent to the use of ALL the cookies. However, you may visit "Cookie Settings" to provide a controlled consent.
Cookie SettingsAccept All
Manage consent

This website uses cookies to improve your experience while you navigate through the website. Out of these, the cookies that are categorized as necessary are stored on your browser as they are essential for the working of basic functionalities of the website. We also use third-party cookies that help us analyze and understand how you use this website. These cookies will be stored in your browser only with your consent. You also have the option to opt-out of these cookies. But opting out of some of these cookies may affect your browsing experience.
Necessary Always Enabled
Necessary cookies are absolutely essential for the website to function properly. These cookies ensure basic functionalities and security features of the website, anonymously.
Functional
Functional cookies help to perform certain functionalities like sharing the content of the website on social media platforms, collect feedbacks, and other third-party features.
Performance
Performance cookies are used to understand and analyze the key performance indexes of the website which helps in delivering a better user experience for the visitors.
Analytics
Analytical cookies are used to understand how visitors interact with the website. These cookies help provide information on metrics the number of visitors, bounce rate, traffic source, etc.
Advertisement
Advertisement cookies are used to provide visitors with relevant ads and marketing campaigns. These cookies track visitors across websites and collect information to provide customized ads.
Others
Other uncategorized cookies are those that are being analyzed and have not been classified into a category as yet.
SAVE & ACCEPT